Journey to the Land of Milk and Honey

Until Rabbi Isaac Luria fixed what would later become the Tu Bi-Shevat seder, the day was most likely acknowledged simply according to the Mishnah (tractate Rosh Hashanah), namely as the day designated for calculating the agricultural cycle of trees for the purpose of tithing. Then, in 16th-century Safed, one of the great modern Kabbalists, Rabbi Luria (also known as the Arizal), innovated a seder on this winter day, paralleling that of Passover in the spring. Each fruit from the Holy Land was ascribed significance, and four cups of wine were to be drunk in a way reflecting the cyclical nature of the physical and spiritual worlds.

This celebration of the world in its physical and spiritual manifestations is particularly reflective of Lurianic Kabbalah, which is invested in intricately charting the relationship between these two forces. Trees, specifically, have a prominent place in Kabbalistic schema; they symbolize a connecting entity between “heaven” – as they grow up toward the sky – and “earth,” where they are rooted. As many who study Kabbalah know, some of the Arizal’s most important contributions to Kabbalah included those of his teachings compiled in the book Ets Haim (Tree of Life) by his primary disciple, Rabbi Haim Vital. The Kabbalistic Tu Bi-Shevat seder was formalized in a book called Pri Ets Hadar (Fruit of the Goodly Tree). Tree imagery features significantly once again in Kabbalistic works known as Ilanot (Tree scrolls). These maps depict the sephirot (emanations of God) and outline how the spiritual world interacts with the physical realm. Read the rest on the Library blog 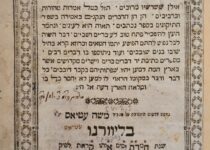