Hag Purim is around the corner!

The Purim “spiel” (Purim play) is one of the unique artistic customs of this holiday. It is considered to be among the first Yiddish theater productions and is a drama-comedy performance with a plot based on Megilat Ester. The content is derived from either piyyut (lyrical commentary) or from parodies of the story of the Megila.

The Purim Spiel evolved from carnivals in Jewish communities in the 1500’s in Germany, Northern Italy, and Poland. These theatrical productions often featured humor, mask-wearing, music, dancing, and fertility ceremonies, which were performed in many European countries in the Middle Ages every spring. The characters’ changing appearance was a central part of the custom.

The conceptual foundation for the custom of the Purim Spiel comes from two words in the Megila, “ונהפוך הוא,” (turned about), a term which comes to justify irregular behavior not generally allowed during the rest of the year. For example, on Purim, permission is granted to become inebriated:

Another example of “turnabout,” wearing masks/costumes and disguising self-identity, are also acceptable only during Purim, and thus permit the central requirement of a good production – immersive costuming – to take place.

Yeshiveh Buhers (young men studying in Yeshiva) were among the first actors of the informal Purim spiel in Eastern-Europe; no women were permitted to participate. The “actors” came to the synagogues and performed the play in Yiddish. Some went to the homes of the Gevirim (wealthy patrons) and were rewarded with a hearty meal. The spectators paid money, which went to the Yeshiva, the synagogue, and to the poor.

Most of the time, these Yeshiveh Buhers did not use a written play script. Rather, they improvised their lines, often imitating and mocking their rabbis for just this one day of the year!

Did the rabbis support the Purim spiel from the beginning? Most did not. It represented for them the conflict between their traditional strict Jewish religious and moral life – and the frivolity, the grotesque parody, vulgar language, and the rebelliousness against the strict social order of those days. Read the rest on the Library blog 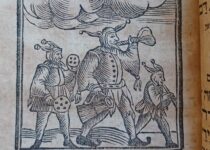