Then is (almost) Now for Reproductive Rights

Where does Reform Judaism stand on the question of reproductive choice, including the legality of abortion? Materials in the Klau Library from the 1970s through today demonstrate that Reform Jewish institutions in America were early promoters of public statements supporting reproductive choice and legal abortion, and continue with their support through the present day.

Read the rest on the library blog 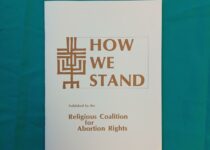