Censorship and Dissent in Early Modern Christendom: Johannes Reuchlin’s defense of Jewish scholarship and the ride of humanism

In 1509, a campaign to destroy Jewish literature was launched in Germany, then part of the Roman Empire. The campaign was led by a Jewish convert to Christianity named Johannes Pfefferkorn (1469-1522/3) with support from various parties including the Dominican Order and the University of Cologne. Authorized by an Imperial Mandate signed by Emperor Maximilian I, Pfefferkorn began confiscating books (excluding the Hebrew Bible) in September 1509 from Jewish communities in Frankfurt, and then later in Worms and Cologne. After protest from Jewish communities, the emperor reversed his previous mandate, and the confiscated books were returned to their owners in May 1510.

In the following months the emperor formed a commission seeking expert counsel on the question of what to do with Jewish books. Appointed to this committee included German Hebraist Johannes Reuchlin (1455-1522). Reuchlin’s position was singular; he was the only Christian scholar with the requisite Hebrew language skills to assess properly Jewish writings, and he was a reputable lawyer and imperial court judge. In his answer to the emperor, titled A Recommendation whether to confiscate, destroy and burn all Jewish books, Reuchlin argued Jews had a legal and theological right to own and use their books. Reuchlin published his Recommendation in a book titled Augenspiegel (Eye-glass) in 1511 Read the rest of the Library blog 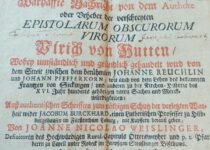