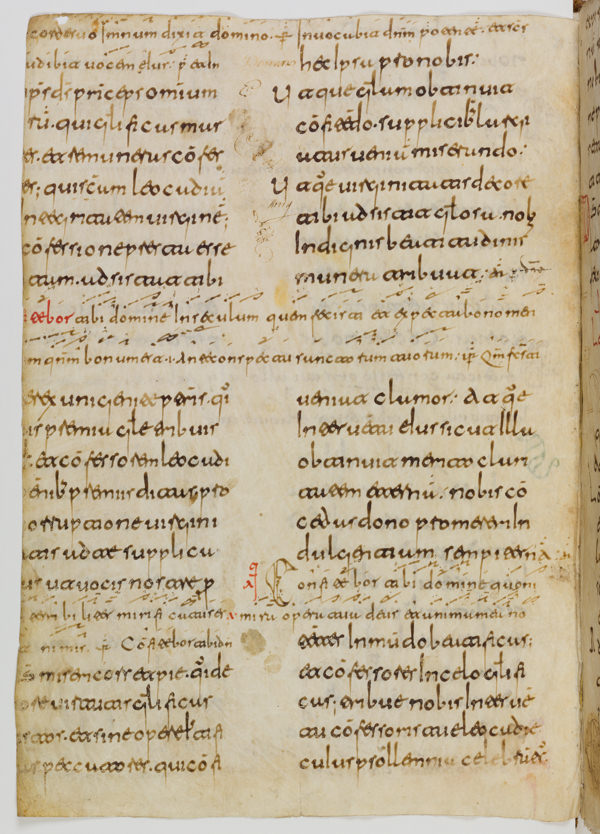 This remarkable miscellany contains a wide range of different texts, times, genres, and
languages. They seem to be bound together by connections to Spain or the Sephardi expatriate
community.
(a) two parchment leaves from a Masoretic version of the Book of Kings (5:2-6:16);
(b) business documents from the Jewish community in Amsterdam, at least one dated 1745,
some in a distinctive Spanish cursive Hebrew and some in Spanish;
(c) a transcription on paper of a Latin text which forms part of a liturgy two leaves later;
(d) two parchment leaves of a Latin liturgy for the Mozarabian church, from the tenth century.
The manuscript comes from St. Eulalia’s parish in Toledo, and contains insertions for the feast
day of St. Leocadia, the patron saint of Toledo. It likely formed part of a larger book of chants
for the community, something like a Liber Usualis. Moreover, the text contains the distinctive
Mozarabian musical notations;
(e) further transcripts of the latter text, signed “Palatino Citadino Romano,” with ink drawing of
a sleeping cat;
(f) a fragment of musical notation with text in Spanish;
(g) Spanish documents referring to the judería of Toledo (1458?);
(h) copies of decrees from the 15 th century, mentioning the Jews of Burgos as well as a royal
order of 1397. The text mentions the years 1390 and 1391 several times;
(h) a statement of Francisco Javier Palomera de Santiago regarding the status of Toledo, dated
Toledo, May 10, 1774;
(i) pen-trials in Arabic along with a fragment of a letter in both Arabic with a transliteration,
which mentions Antonio Peña Guillen;
(j) a small Arabic word list with translation;
(k) a revision of the Mozarabic liturgy with an introduction by Alfonso Ortiz of Toledo
addressed to Cardinal Francisco Ximenez de Cisneros, Archbishop of Toledo (1436-1517). The
text concludes with a colophon by copyist Petrus Bagembach of Nürnberg, January 25, 1500.