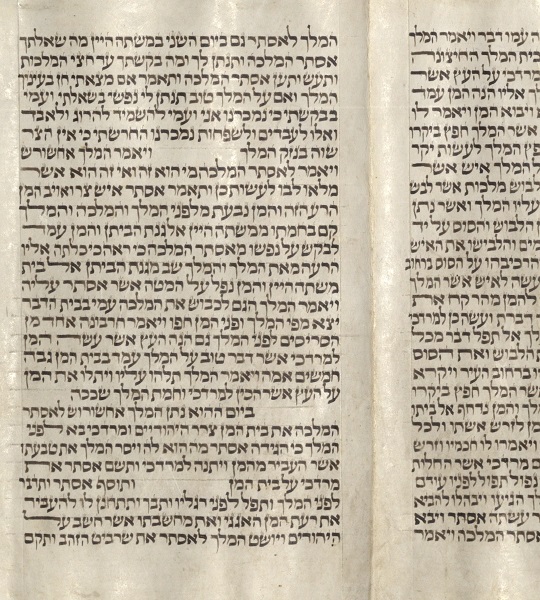 An example of an important Esther scroll with an engraved border designed by Shalom ben Mordecai Italia (also known as Shalom D’Italia). The first membrane, however, does not have the engraved border but rather, was decorated by hand in a matching fashion with drawings in brown ink.  The columns of text are written within elaborately decorated arcades. The upper margin is ornamented with repetitive decorative elements, most prominently, two women holding palm branches, their heads turned away from one another. The women are leaning on broken pediments and the space betwen the pediments is ornamented with flower-filled urns and decorative masks. Similar urns are placed between each pair of women. Figures from the Esther story appear in the niches between each text column; they stand on small octagonal pedestals.  Above each text panel is a decorative cartouches with images of various land- and cityscapes. The designer of the engraved border, Shalom D’Italia, was born in Mantua and worked as an artist in Amsterdam from  circa 1641-1649.  During this time he created several engraved borders for Esthers scrolls, most of which cloesly resemble the design found in this HUC megillah.