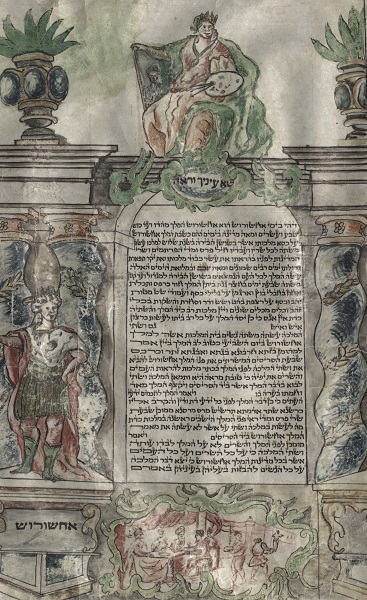 Date:
Second half of the 18th century

A lavishly decorated and illustrated scroll; text panels set within elaborate arcades separated by double twisted columns and accompanied by the figures of the heroes from the Esther story: Ahasuerus, Vashti, Mordecai, Esther, Haman, Zeresh, Hatakh, Harbonah (the later with a Hebrew abbreviation “let him be remembered for good”.) Their names are written in Hebrew characters below the figures, on the bases of the columns. The upper margin is decorated with figures of women representing various allegorical attributes, derived from the iconographical imagery of Cesare Ripa.  Below these women, biblical Hebrew verses are penned within decorative cartouches. Each sheet contains two allegorical figures and between them are decorative cartouches surmounted with crowns with images of people involved in various activities. These scenes are also inscribed with biblical quotations.

The separate benediction sheet is adorned in the same style as the scroll. It contains two cartouches, one in the upper margin and another in the lower margin. At top, a couple dancing is accompanied by the verse: אז תשמח בתולה במחול (Jeremiah 31:12) “Then the maiden shall rejoice with dance (…)”. At bottom, an image of a building, likely a reference to the Temple and the messianic times.