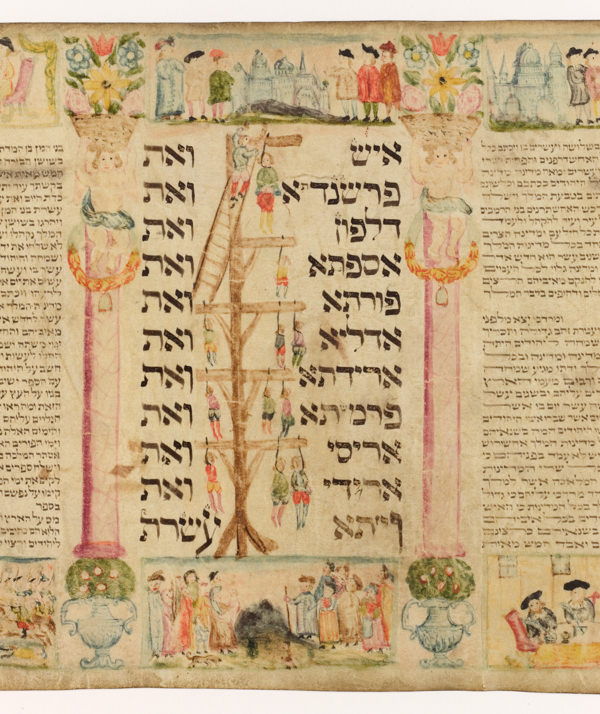 Hand-painted scroll with decoration based on the popular scrolls with engraved borders produced in in Amsterdam in the early 18th century. The scroll opens with a panel containing several illustrations that are closely related to those depicted in the original Amsterdam scroll, although they are not identical to those in the prototype. In upper register is a royal couple accompanied by courtiers. The middle register consists of three rectangular frames: the center one contains the benedictions recited before the Megillah reading, the frame on the right shows chamberlains, Bigthan and Teresh, hanging on two gallows (2:23), while the one on the left depicts Haman and his sons hanging on three gallows (7:10, 9:14). The lowest part of decoration contains three narrative scenes; from right to left: Hatakh is bringing clothes for Mordecai (4:4), Haman leads Mordecai through Shushan (6:11) and Mordecai writes a new decree (9:20). The following text columns are separated by simple columns on the top of which are depicted putti who are holding the baskets filled with flowers. Beneath the columns are placed the vases filled with green plants. The rest of the available space was covered with illustrations enclosed in rectangular frames. The scroll ends with the blessing and the text of the liturgical poem. In one of the illustrations found in the lower margin there are depictions of the flags of Austria (three equal horizontal bands: red, white and red) consequently, the scroll is localized to Austria.
The scroll contains also an illustration of the hanging of Haman’s ten sons (9:14) set within the 7th text column of Megillah.