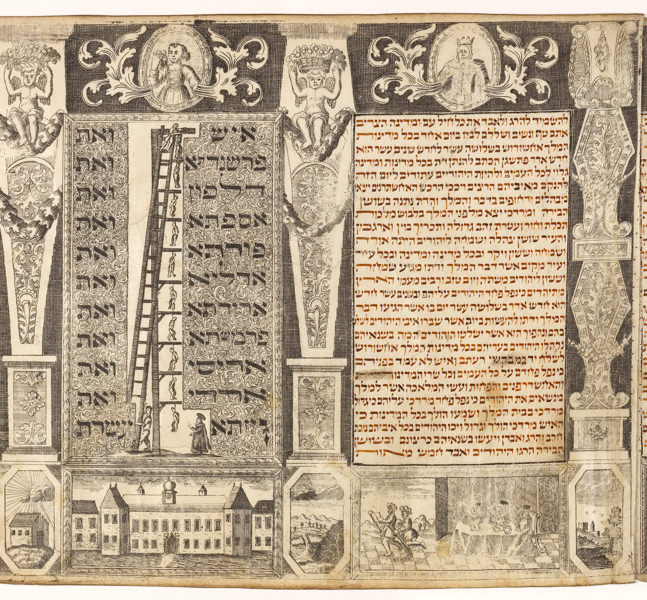 A lavishly decorated and illustrated engraved megillah. The scroll opens with a panel containing illustrations from the Esther story. In the upper register is an image of King Ahasuerus and Queen Esther accompanied by courtiers.  In a rectangular panel directly below Queen Esther is shown seated on a throne surrounded by elaborate tendrils, small lions, birds, heads of angels and the Hebrew printed words ברכת מגילה (blessings for the megillah).   In the middle register are three rectangular frames: the center panel contains the benedictions recited before the Megillah reading, while the panel on the right shows the traitorous chamberlains, Bigthan and Teresh, hanging on two gallows (2:23), and the one on the left depicts Haman and his sons hanging on three gallows (7:10, 9:14). The lowest register contains three narrative scenes (from right to left): Mordecai receiving the clothes from Hatakh (4:4), Haman leads Mordecai through Shushan (6:11), Esther and Mordecai write letters instructing the Jews to observe Purim (9:29). In the upper margin, the decorative medallions feature images of the protagonists of the Purim story. In this scroll, some of the figures have been effaced. The text is written in regular rectangular columns enclosed in frames and separated by columns filled with trees, flowers, acanthus leaves, heads of angels, and architectural elements. Below are placed octagons with various land- and seascapes; and below the text columns are narrative scenes.
The scroll contains one further illustration depicting of the hanging of Haman’s ten sons (9:14). It is incorporated directly into the 14th text column of the Megillah. The background of the names of Haman’s sons is covered with printed filigree motif (the text in the scroll was hand-written but the names of Haman’s sons, ברכת מגילה in the opening decoration and ברוך at the end were printed). The scroll ends with five figures of the Esther story protagonists who are holding empty oval shields.