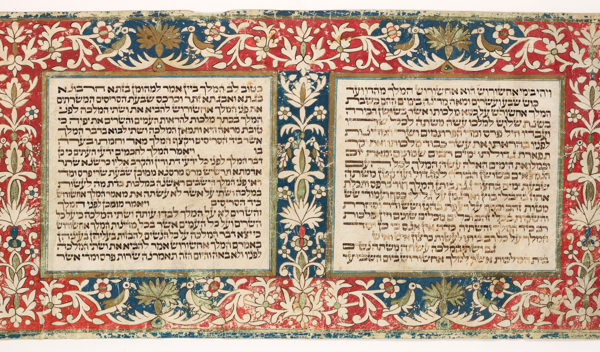 The scroll opens with the coat of arms of the Pacifico family, (פאציפיקו), it consists of a rampant lion holding a lulav branch. The colophon placed at the end of the scroll bears the names of the scribe who was a member of this family – Samson Pacifico.  The borders of the scrolls are lavishly decorated with repeating floral motifs and birds. The separate benediction sheet that accompanies this scroll is decorated in the same style. It is divided into three parts and its central panel contains a cartouche with the coat of arms of another Italian Jewish family – Nachman (נחמן). It consists of a lamp hanging on three chains and a dove that sits on the lamp’s rim. Perhaps, this scroll was originally written by Samson Pacifico for himself and when the scroll was bought or gifted to the next owner, a new benediction sheet with the coat of arms of the new family was created. The bold red and blue floral forms are found on other items of Judaica created in Ancona in the second half of the 18th century, such as ketubbot, and it is very likely that this Esther scroll was created in Ancona as well.