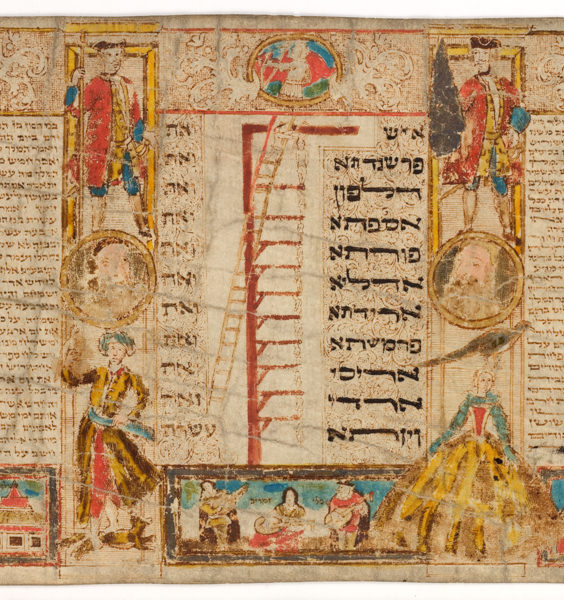 This hand decorated and illustrated scroll that opens with a monumental portal enframing the blessings recited before the reading of the megillah and a scene of Haman leading Mordecai through Shushan. Below this illustration is a cartouche inscribed with a related Hebrew quotation from the Book of Esther: לפק ויקח המן את הלבוש ואת הסוס (6:11). Some letters in this verse are enlarged  (ח, מ, ן, א, ת, ,ה) indicating that this biblical verse also functions as a chronogram. The value of the enlarged letters is equal to 504, corresponding to the year 1744 –the date of the creation of this scroll.

In the upper margin signs of Zodiac are painted within medallions and surrounded by a delicately drawn filigree background. The text panels are separated by narrow frames filled with various figures: soldiers, hunters and women wearing rich costumes drawn in elaborate details. In the center of the frames are circles with the heads of the protagonists of the Esther story. Most of the spaces in the lower margins are filled with illustrations enclosed in rectangular frames; some of them are inscribed with identifying Hebrew texts. The scroll ends with five busts of figures in the Esther story (from right to left): Haman, Mordecai, Zeresh, Esther and Harbonah enclosed in medallions; above them are Hebrew inscriptions with their names and the word ארור or ברוך. The scroll shares some common features with the popular type of Amsterdam engraved borders decorated with busts of the Esther story  enclosed in the medallions placed in the upper margin (VI.9(1).

The scroll contains also an illustration that is incorporated into the text of Megillah (column no. 9) which depicts scene of hanging of Haman’s ten sons (9:14). The background of the names of Haman’s sons is covered with filigree motif.  The unusual motif of soldiers decorating the frames of this scroll is also found in a highly similar megillah held in the Newberry Library, Chicago (MS 17), the scroll is also similar to one found in the Library of the Jewish Theological Seminary, New York (S54).