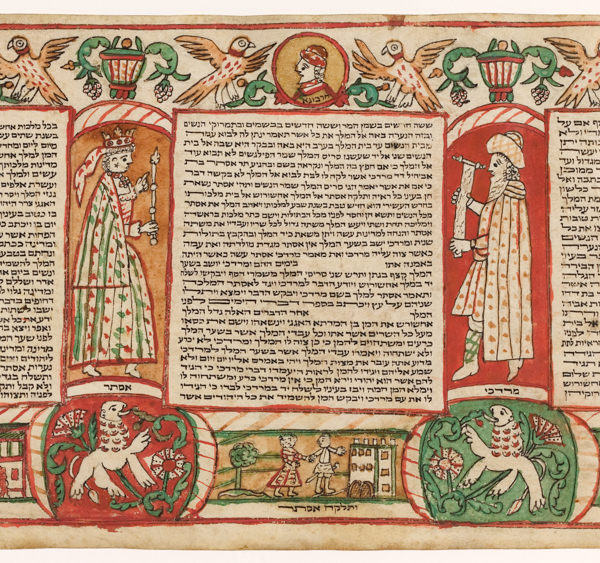 Later and simplified copy of the scrolls made by Aryeh Leib ben Daniel of Goray (Goraj, Poland) (אריה ליב בן דניאל מגורייא) in the 1740s. General lay-out is similar to that found in the original artwork, but the drawings here are more naive and colored. The text columns are enclosed in frames, separated by figures of the Esther story protagonists with their names beneath inscribed in Hebrew script below each figure; they are: Ahasuerus, Vashti, Mordecai, Esther, Zeresh and the king’s seven advisers enumerated in Esther 1:14: Carshena, Shethar, Admatha, Tarshish, Meres, Marsena, Memucan. The upper margin is filled with medallions containing busts of the princes who are the minor characters of the story (all the figures are identified by the their names written in Hebrew), they are: Mehuman, Bizzetha, Harbonah, Bighta, Abaghta, Zethar, Carcas, Bightan, Teresh, Hegai, Hatakh. The last image, identified as Daniel is an unusual addition and may have been included because he was also a servant of a King and prophesied the end of the 70-year exile which according to rabbinic tradition occurred with the reign of Darius purportedly the son of Esther and Ahasuerus. The busts are accompanied by birds, alternately with vases with vines. The lower margin is decorated with narrative scenes from the Esther story, identified in Hebrew, and separated by figures of rampant lions.