Few of us learned in school that the Thanksgiving celebration has roots in Wampanoag and other indigenous cultures of North America, or how, in 1621, the Wampanoag leader Massasoit formed an alliance with the pilgrims because his nation’s population had been greatly reduced by the ravages of disease brought to North America by Europeans and were in danger of being overtaken by the neighboring Narragansett nation. Massasoit needed European weaponry for defense; in return, the Wampanoag taught the pilgrims how to grow native food. The sharing of the traditional harvest feast was a celebration of this beneficial alliance. Instead, we were often taught a vague tale about friendly Indians who helped the pilgrims grow food and shared in the settlers’ harvest celebration. The deft political maneuvering on the part of Massasoit that ultimately saved the pilgrims from starvation became, in the American imagination, a milestone in the “Christianizing” of American soil.

Although the national Thanksgiving Holiday wasn’t declared until 1863, Thanksgiving celebrations were common throughout the colonial and early years of the United States, and several states officialized observances in the first half of the 19th century, often with annual proclamations about the Christian values to be celebrated. The representation of Christian pilgrims as emblematic of our national identity was not automatically met with consensus, however, and one of the most vocal critics of the “Christian Nation” narrative was Isaac Mayer Wise. Read the rest on the Klau Library blog 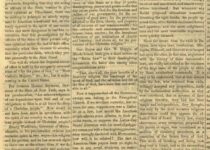